For more than three years I have been the Arts, Culture and Technology editor for the print version of Siempre Mujer. The bimonthly magazine with 3,560,000 readers reflects the beauty, fashion, lifestyle and dreams of Latinas who keep their traditions alive as they embrace new American values. In 2013, I also became their Wellness and Travel Editor.

I pick the topics and write all the content in these sections. In Arts and Culture, I love to  write Cineterapia, an open-ed that focuses on the feelings and lessons that movies teach. I also review books and create “Best of” lists that include recommended Ted Talks, female characters written by females, and books to gift, among others. I came up with the idea of spotlight, a section with short  interviews for upcoming talent in arts and the digital sphere; and also with the proposal of a technology box with write-ups on useful start-ups and websites, or recommendation lists for Apps, gadgets and gift guides.

For Wellness and Travel I write mostly features. I interview people and love to create stories that showcase an integrative approach to health, joy and well being.

If you feel like practicing your Spanish, read a feature about Colombia, or one about what kind of Yoga is right for you. 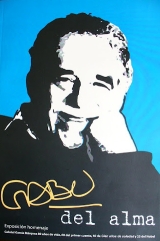 The XX International Book Fair of Bogotá organized a 10,764 square foot exhibition to honor Gabriel García Márquez on his 80th birthday, the 25th anniversary of winning the Nobel Prize in Literature and the 40th anniversary of the publication of A Hundred Years of Solitude. It ran for 13 days and it broke the record for the most visited with 70,000 people. I was the head of the research team and the exhibition coordinator.

We had 25 first editions of A Hundred Years of Solitude in different languages on display, a film program with most of his scripts and recorded appearances, and even a selection of his favorite music to listen to. I led the 16 person team that gave guided visits to more than 45,000 students from public schools in low-income districts.  A few samples of press coverage in Colombia here and here, in Mexico, here.